Why choose a centrifugal fan that curves backwards

When we define the required volume flow rate, we need to consider the flow resistance encountered by the fan in the application and whether it can provide fresh air or a cooling process. Volume flow rate (in m3/hr) and pressure (in Pascals-Pa) have become two major issues that must be resolved in fan operation. 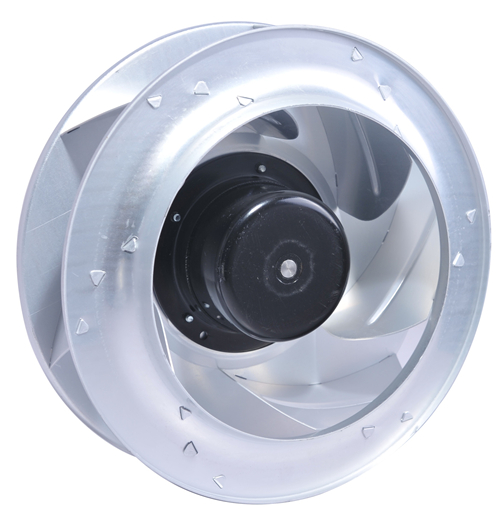 It is important to choose the performance characteristics of a fan, which should meet the two major problems to be overcome or be near the highest efficiency point. Using the peak efficiency of the fan can minimize energy consumption and fan noise while providing the required performance.

How does the centrifugal fan that bends backwards work?

The name of the centrifugal fan is derived from the direction of flow and how the air is generated radially from the outer edge of the fan. The centrifugal fan that curves backward is characterized by its cylindrical shape, several large curved blades and a tapered inlet nozzle. In the example shown below, the fan is rotating in a clockwise direction.

The volumetric flow is plotted along the x-axis and the system pressure is plotted on the y-axis. When there is no pressure in the system (the fan runs freely), a centrifugal fan that curves backwards will produce the maximum flow. On the suction or exhaust side of the fan, the volume flow rate will decrease due to resistance.

The peak efficiency is at the midpoint of the characteristic curve. At this time, the output power of the fan (volume flow (m3/s) x static pressure (Pa) and power input (W) ratio is the largest, the sound pressure generated by the fan is the smallest. Below or above the optimal operating range, the fan changes Noisier, the efficiency of the fan system becomes lower.

The advantage of using a reverse-bent electric impeller is that it has no stall point. This means that no point on the fan characteristic curve is inoperable. The backward curved motor impeller also has the highest static efficiency of any fan type and the mechanism for generating airflow, which means it can also be used in a plenum or incorporated into a rolling space to guide airflow out.

Other fans, such as axial, diagonal and forward-curved centrifugal fans, have certain areas that are not desirable. These areas can form turbulence, adversely affecting the long-term reliable operation of the fan.

The advantages of non-overload performance, high static efficiency and flexible installation options are the reasons for choosing the backward bending fan, which can provide the best solution to match the airflow with flow resistance. In order to achieve these benefits, the intake ring (or nozzle) needs to ensure a smooth laminar flow when air enters the impeller.

The position of the inlet ring should be concentric, and there should be a small overlap at the fan inlet.

The fan bent backwards as described above can be used in a plenum or incorporated into a rolling space to guide airflow out...

When used in a plenum or in an air handling unit, designers have many air delivery options...

When the air enters the duct on the suction side of the fan, it may pass through some devices with flow resistance (particulate filter, heat recovery unit, heat exchanger, etc.). When the air passes through the fan, it turns to 90 degrees and discharges radioactively. This airflow pattern provides the option of positioning the exhaust duct in a radial or inline position.

When used in a rolling space, the discharge of airflow presents a directional trend and shows the change of impeller performance...

Using a basic roller can reduce the speed of the air and convert some dynamic pressure energy into static pressure, thereby producing a steeper pressure characteristic. The bending characteristics of the rollers also make the exhaust operation quieter.

It is important to ensure that there is enough clearance on the suction and exhaust sides of the fan.

The general recommendations for intake and exhaust conditions are:

From the fan inlet to the diameter of the fan, there is no obstruction or change in flow direction

The hydraulic diameter should be greater than 2.2 x the fan diameter

Inline flow direction-from the back of the fan to its diameter, there is no obstruction

Why choose a centrifugal fan that is bent backwards?

When the required operating point falls in the area of ??the intermediate system pressure, the intermediate volume flow rate of the fan characteristics should be considered. The fan should be selected within the center range of its flow characteristics. The point of peak efficiency is in the middle of the fan characteristic curve, which means it runs in its quietest state. Avoid operating outside the optimal range (under extreme conditions of high flow or high working pressure), because turbulence and the aerodynamic efficiency of the impeller blades will generate noise and system inefficiency at this point.

The air on the inlet side of the impeller should be kept smooth and laminar to increase the efficiency of the impeller blades as much as possible. Using the air inlet ring (inlet nozzle) to overlap the impeller inlet cone can help eliminate airflow disturbances before the air passes through the fan, reduce noise caused by turbulence, and minimize the work load at the operating point and maximize efficiency.

The no-load feature enables the installation of fans without rollers, and the impeller design meets the highest static efficiency of all types of fans, which means that the backward bending fan is a flexible and adjustable fan design that can be installed in a wide range of Use within the scope.If you want to know about other product issues, you can contact us, thank you.